“-I didn’t earn a single eris, and my free service went up in smoke too. Sigh…”

In the end, I didn’t reap any rewards from this.

Those fellows have attempted kidnapping several times before, but they always end up releasing their victims in less than a day. The kidnapped girls weren’t harmed, and were in fact treated like princesses, so those cases were never reported.

On top of that, it seems like they had the backing of a powerful aristocrat, so the police have no intention of going public with this incident. Of course, that means there’s no bounty for turning them in either.

And the assassin like guy that they hired ended up disappearing somewhere along the way… Well, as long as we never meet again, I guess it doesn’t matter. That kind of inflexible person will probably see our confrontation as a fulfilment of his duty, so he shouldn’t come after me.

It’s good to see that my friends are unharmed, but the only one who suffered any kind of loss was me.

“And here I thought you were a better person… You really are hopeless, aren’t you?”

Lynn said in response to my grumbling as we sat at our usual places at the guild. She sounded exasperated, but it doesn’t seem like she means it. Actually, I think I spotted a faint smile on her face.

“I’m thankful to you, Dust, but I should properly offer my thanks to the other two who were there.”

Taylor really is the model of a gentleman. That said, it’ll only create problems if I were to introduce them to him. After all, one of them is a noble, and the other one is a succubus.

“I know the girl, but who’s the guy in the helmet, Dust?”

As a regular of the store like me, Keith is obviously aware of the true identity of Loli Succubus. As for the helmeted bastard… I suppose I can tell him when we are in private.

“Still, that cute girl is really amazing. I’ve never even heard of a spell that can control dreams. I wonder if she will teach me next time?”

Speaking of which, I made that sound like a special spell that only Loli Succubus could use, didn’t I? Lynn must never know her true identity. Only bad things lie down that path.

“Oh, how about letting her join our party? I’ll be happy with another girl to talk to, and you are on good terms with her, right?”

If we do that, her identity will definitely be exposed. We need to cut this off immediately.

“That’s not a bad idea. Though, how did you get to know such a cute girl in the first place, Dust? You aren’t blackmailing her or anything, are you?”

“Of course not! It’s just, her workplace had an issue with a few thugs once, so I helped her resolve things, that’s all.”

“You’re pretty useful when it comes to problems of that nature, huh?”

They seemed convinced by that, but for some reason, I don’t really feel good about it. Still, it’s not that big of a deal. Just bear with it.

“Nevermind that, let’s go pick up a quest before I actually commit some kind of crime…”

“You’re joking, but it’s scary how believable it is…”

My current net worth is negative. If I don’t find a way to deal with it soon…

“Ah, if you have money issues, use this.”

Taylor slammed a full bag onto the table.

Is this full of money?

“What are you planning?”

“You beg for money every day, but the moment I actually give you money, you become suspicious? This is recompense from the guild. It’s an apology for accidentally introducing a criminal into our party.”

Taylor jabbed his thumb over to the counter, and Luna offered us a deep bow upon meeting our gaze.

“It’s supposed to be split up amongst us, but we’ll give it all to you. You did save our lives, after all.”

“I may not look like it, but I am thankful for that.”

Seriously, this party sure can’t be honest. It’d be really cool for me to reject this money, but my personal philosophy is not to refuse anything given to me.

“Thanks. Looks like there’d still be some money left even after I repaid my debts, so let’s have a toast!”

“What happened to all that talk about quests? Seriously, what am I going to do with you? I’ll join you for today.”

“Sure. It’d make a good celebration for our reunion, so let’s drink!”

Yeah, this is how friends should be.

Sharing both joy and hardships is what friends ought to do.

“Alright, we’re drinking till we drop! Bring out the beer!”

“Seems like you made quite a bit of money. How about repaying what you owe Moi?”

A white gloved hand grasped the hand I was using to wave over the waitress.

Who the hell is it that dares to get in the way just when things are going well?

I looked up and saw a familiar face.

“Oh, Sir Vanir. Are you here to work again?”

The consultation corner he ran in the guild was a big hit. Is he here to set up shop again?

“That was the plan, but that won’t be necessary now. Now then, Moi’ll be taking the money for the magic item.”

“Eh, what are you talking about? Didn’t you say you’ll give them to me for free?”

“I believe I said I’ll give you one magic item for free.”

Sir Vanir took the bag of gold and left a “Fuhahaha! Your dark emotions are pretty delicious!” before leaving the guild.

I completely forgot about it… Yeah, he did say he’ll give me one magic item free of charge, right?

I was too shocked to even try to stop Sir from leaving.

I blankly gazed at my companions, and all of them patted me on the back in sympathy.

Don’t you all say that at the same time.

“Ah, god dammit! Why is it that money always ends up leaving me?!”

“Money just doesn’t like you, it seems. Come on, let’s go pick a quest. We’ll go with you. We are friends, after all.”

Lynn said, blushing slightly. Behind her, both Keith and Taylor nodded.

Oh fine, guess I’ll have to work for my money today.

“Ah, right! Sir took away all of my money, so I won’t be able to pay back the debts I have due today! Let’s hurry up, accept a quest and get far away from the city!”

After quickly accepting a quest, we left the guild to be greeted by a bright, cloudless sky.

The voices of the store owners trying to attract customers could be heard as well.

The familiar faces of adventurers heading out of the city.

The policemen who immediately perked up upon seeing my face.

“The day is so clear that it’s starting to piss me off.”

“Don’t vent your anger on the weather. Sigh… and you were so cool on that night…”

I whipped my head around upon hearing Lynn’s whispered words.

Seeing her give me a wide and impish smile, I felt my heart skip a beat.

“You were awake back then?”

After giving me a vague answer, Lynn happily skipped ahead.

Taylor, and Keith traded looks, shrugged, and chased after her.

Seems like it’ll be another rowdy and interesting day today.

Hello everyone, I’m the author of “A time in the limelight for this fool too!”, Hirukuma.

Most of the people who picked up this book will most likely be fans of Konosuba, so you might be asking yourself, “Who the hell is Hirukuma?” I’m a fledgling author who wrote “Reborn as a Vending Machine, I Now Wander the Dungeon.” that debuted in Sneaker Bunko about a year ago.

At the start of this year, my manager Mr M asked me “Hey, do you want to try your hand at writing a Konosuba Spinoff?” As a fan of the Konosuba series from back when it was a Web Novel, I instantly went “Really? Yes, please!”, but after the phone call ended and I regained my senses… The pressure of “I just agreed to something really big” finally crept up on me.

I’ll be in charge of the spinoff of a big name, extremely popular work. Despite being somewhat afraid of that, I ended up writing this book as a fan. This is just my opinion, but one must, at minimum, like the original work in order to write a proper spinoff for it. I can proudly say that I meet that minimum requirement. I’m a big fan after all.

If I approach this from the perspective of a fan, not only as an author writing a book for a job, wouldn’t that result in an extremely interesting work? Not only using the world and characters of Konosuba to make my original characters shine, but also to take a deeper look at the situations that happen behind the scenes of the original story. That’s my hope as a fan.

There are a lot of people I need to thank in writing this work.

First off, there’s Akatsuki Natsume-sensei. Thank you very much for letting me write a spinoff to Konosuba, a work filled to the brim with wonderful characters. If I were to put to words all my feelings of gratitude and appreciation here, it will probably end up being over ten pages long, so I’ll have to properly express my gratitude at some other time.

Just looking at Mishima Kurone-san’s character illustrations fills my head with ideas, and it’s all thanks to her that I can make Dust and the others run rampant in an entertaining manner.

Yuuki Hagure, who is in charge of all the beautiful illustrations in this book. Thank you for drawing all these wonderful pictures. Darkness-san is really nice…

Everyone involved in the production of the anime. When I was writing, the characters were always bouncing around in my head, and I could never forget the voices of the characters provided by the Seiyuu.

Everyone in the editorial department. Mr M whom I exchanged opinions with on numerous occasions, and everyone involved in the publishing of this book.

Lastly, thanks to everyone who picked up this book! 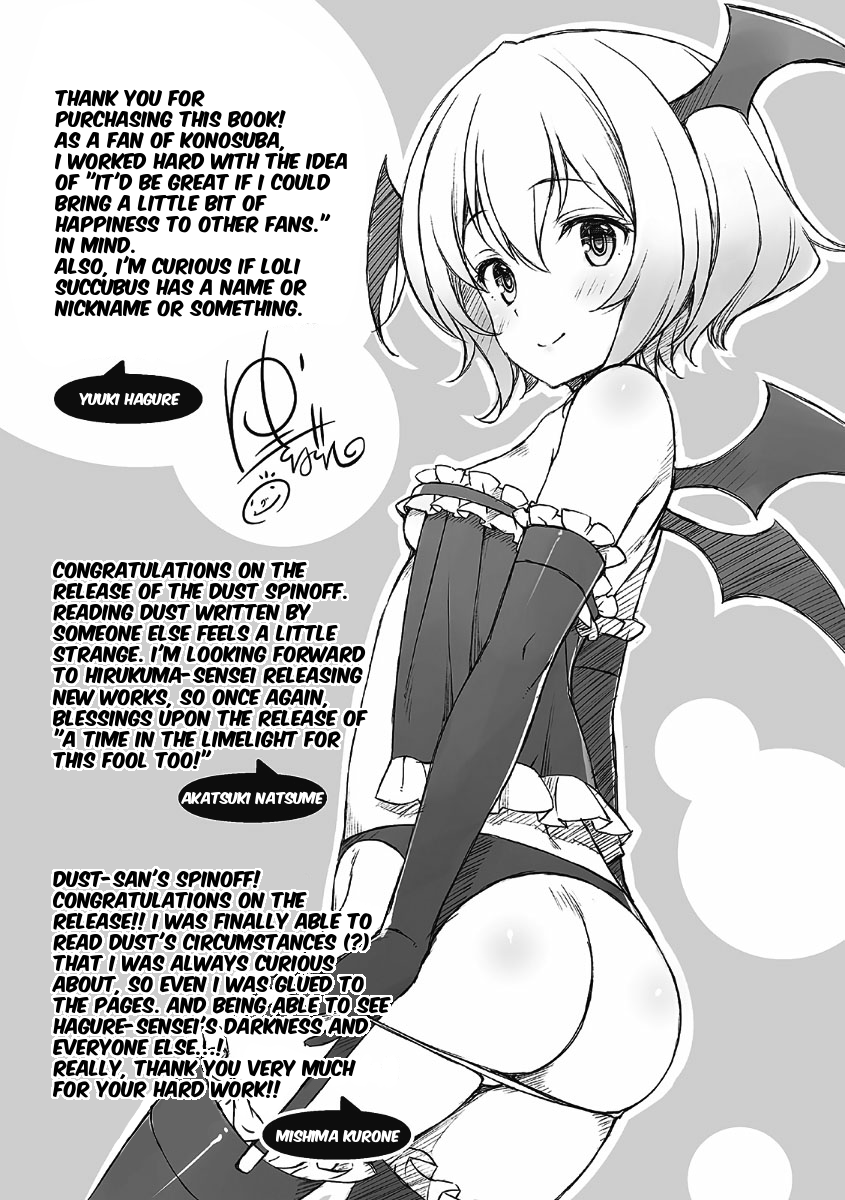 Well, this is the final Chapter of the first Dust spinoff. I hope you guys enjoyed reading it, I certainly did. It reminded me a lot of the earlier volumes back when Kazuma was still wallowing in poverty, and thus most of what made me fall in love with the series in the first place.

Anyway, I’ll be taking a two week break to put the finishing touches upon Volume 13. Yes, I know a lot of you folks have been waiting for it. Don’t worry, it won’t be long now. There are still three short stories included in the Dust spinoff, which will be going up over the next week, but other than that, the next proper update should be on 6th April, with the Volume 13 prologue (A challenge to this Lich!).

See you guys then.