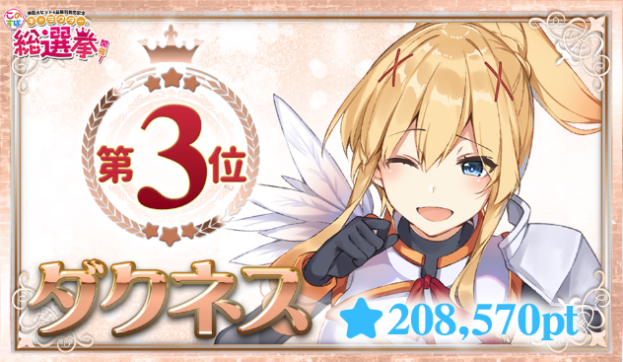 [This is the third short story that was released on the sneaker bunko site for the top three winners of the popularity contest.]

When I came to, the first thing I saw was Darkness creeping into my room for a night raid.

“… This is my first time, so I’d really wish you’d pay attention to the mood when you do stuff like this.”

“I-Idiot, what are you saying!? Don’t say such misleading things the first thing in the morning! What were you going to do if someone saw us and got the wrong impression!?”

To be specific, it’s not actually night right now, so calling it a night raid is perhaps not strictly accurate.

Darkness quickly hastened to shut me up, but it’s already too late…

“A-Awawawawawa! Darkness is leaning over Kazuma first thing in the morning!”

“Aqua!? Wait, that’s not it! I have something I need to talk to Kazuma about and wanted to wake him…!”

Aqua said while peeking in through the gap in the door, and Darkness hastily shouted back while covering me with my blanket.

“— In other words, after you tripped over me while waiting for a good time to wake me up, I woke up just as you were trying to get off me without waking me?”

“Y-Yes, that’s exactly it! I thought it was uncharacteristically clumsy of me too…!”

Darkness seemed to be on the verge of tears as I finally understood what happened after much explanation.

“So that’s when you thought ‘Since Kazuma-san is already awake…’ and decide to go through with it, right?”

“Aqua, don’t butt in! Who would do something that stupid!? Ah, dammit…!”

Darkness took a moment to compose herself after receiving our constant teasing and, with a freshly serious expression on her face, said.

“Kazuma, please lend me your aid! Chris has been acting really strange as of late!”

—While watching over her from the shadows, Darkness whispered to Aqua and me.

“… Chris has been hanging out with some unsavory characters around here recently. I wanted to ask her what she was up to myself, but, err…”

Darkness trailed off, glancing between Aqua and me.

When I urged her to continue, Darkness reluctantly turned towards me.

“… Well, thinking about it, I too hang out with some unsavoury characters…”

“Oh, oh, Darkness-san, you sure said some interesting things, haven’t you!”

“Kazuma-san, hold her down! I’m going to put her hair into pigtails and parade her around the adventurer’s guild!”

As the two unsavory characters closed in on Darkness, she motioned for us to be quiet between bouts of near silent pleading.

“Seriously, so this is why you brought me along… Chris has the Enemy Detection skill, so she’ll easily figure out if anyone else is following her.”

“Yes, exactly. With you here, we can follow her much more closely with your Lurk skill. Normally, there’s no way I could’ve tailed her from this close… Ah, that’s him, Kazuma! Anyone would say that man looks to be up to no good… Ah!? He brought out a suspicious bag!”

“That’s the guy who runs the cake shop. He apparently used to be an adventurer, but his dream was always to open a cake shop. It seems like he’s passing Chris good flour and sugar at her request.”

“Hey, Darkness, get a hold of yourself! Shouldn’t you be happy that we were worried for nothing!?”

Darkness fell limp for a moment upon hearing Aqua’s words, but quickly leapt to her feet.

“Y-Yes, that man is just the start! There’s another man I’m actually worried about!”

With a slight blush, Darkness declared to cover up her misunderstanding.

“—Look into that alley. You’ll understand why I’m concerned at a glance.”

Chris’s next destination was a shadowy alley.

Following Darkness’s instructions, standing in the alley was a man in a white coat with a meat cleaver hanging off his hip.

His white coat seemed stained with something, so I used Farsight to take a closer look, and those stains turned out to be blood…!

“That’s the butcher. He specializes in dealing with chickens and other birds… Ah, Chris just received a bag of eggs from him. That’s a relief, Darkness. Seems like she’s just out on a shopping trip.”

“Darkness, calm down. Rather than berating yourself, you should be thankful that nothing happened to Chris.”

Darkness buried her face in her hands and seemed to grow smaller.

“Say, you guys have been following me since morning. What’s going on?”

She must have closed the distance while Aqua and I were busy comforting Darkness.

“—Ahahaha! How foolish of you, Darkness! I’m a devout follower of Eris who loves justice, you know? There’s no way I would end up bad people!”

After hearing our explanation, Chris let out a hearty laugh.

“Kuh, I have nothing to say… To think that I would doubt a friend like that…”

Chris let out a chuckle towards Darkness who fell onto her knees.

“Heheheh, I’m actually happy about that. After all, it just means you care about me that much, right, Darkness?”

“Uggh…. That might be true, but I judged others by their appearances and even cast my doubts on them. As a servant of Eris, I don’t think I can forgive myself…”

Darkness seems to place a lot of importance on the weirdest things sometimes.

“It’s fine, you might have gone a little overboard, but it’s all out of concern for a friend. I’m sure Eris-sama will forgive you.”

As Chris said that with a smile, Aqua interjected with something completely unnecessary.

“Do you really think so? She’s really serious and inflexible, so she might not actually forgive Darkness.”

Darkness buried her head between her knees and shut herself out from the world.

Though, there was something that bothered me.

“Say, Chris, you bought quite a lot of things today. What are you planning to make with that?”

Chris stuttered while trying and failing not to look at Darkness.

So it has something to do with Darkness, then?

“It’s a cake! Flour, sugar, and eggs is definitely for a cake! Chris, is the birthday of someone you know coming soon?”

At Aqua’s sudden words, Darkness and Chris both seemed to stiffen up in shock.

“Right, Aqua, let’s go home. I’ll give you some money, so buy some delicious wine for later, okay?”

Having her plans for a surprise party revealed, Chris stood with trembling shoulders and a red face.

Darkness, too, was trembling in much the same way.

I turned towards the two of them and said,

“I’ll have Megumin cook up a lavish feast, so you two come home early, okay?”

On the way home, I bought a stuffed toy for a certain someone who, despite being usually serious and stiff, has a soft spot cute and fancy stuff.