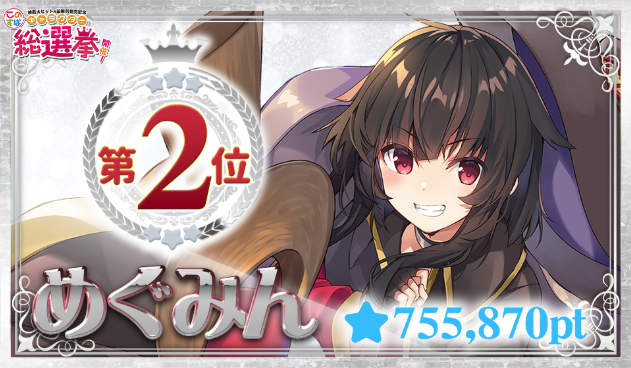 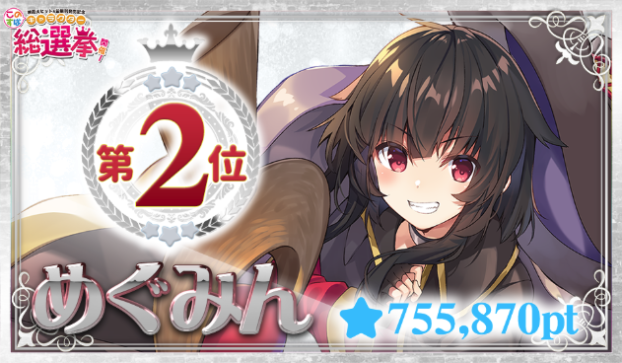 [This is the second short story that was released on the sneaker bunko site for the top three winners of the popularity contest.]

A large explosion blossomed over the rocky mountains not too far from Axel.

When the shockwave and dust cloud subsided, only a large crater remained.

“Kukuku… So the pitiful sacrifice became a part of my power today… However, your existence will not vanish. Indeed. After all, you’ll become the experience points of the great mage Megumin and forever exist as part of me…!”

The great mage said that while laying collapsed on the floor.

“Yeah, yeah, that lost kobold you defeated will definitely live on in your heart. Here, lift your arms up a little. I’ll carry you.”

“Hey, I’m basking in the afterglow after defeating the monster in a fierce battle, so please stop calling it a lost kobold. That sense of scale really makes me feel disheartened, you know?”

What fierce battle? The only thing you did was sight a lone kobold wandering around and blew it up from afar.

“…Hmm? Can you see a kobold over there? And it looks like there are two of them…”

Perhaps drawn by the sound of the explosion, a few figures appeared behind a rocky outcropping in the distance and seemed to be looking our way.

Using my Farsight skill, I confirmed that they are indeed kobolds.

“They probably came searching for my sacrifice. Kazuma, please direct them to the corpse of that kobold. Allow him to at least rest in peace…”

“No, as an adventurer, I can’t let them go. Plus… Is that really something you should be saying while lying on the ground?”

I drew my bow and nocked an arrow while aiming at the faraway kobold.

“Sorry, I bear no grudge against you, but… Let your life become my power… Snipe!”

The arrow that I loosed with my skill was guided straight into the chest of one of the kobolds.

“That was a really nice shot, Kazuma! You always give a score to my daily Explosion spell, so I’ll do the same for you in return… Hmm, I feel like you’re showing mercy and holding back, so I’ll give it 72 points this time.”

“Hey, stop, if you assign a score to my shooting, I will suddenly feel self conscious. Dammit, just let me take out the last one… Wait…”

After being briefly distracted by Megumin, I turned back and noticed that the number of kobolds have increased.

Three kobolds were pointing in our direction.

“Hey, I think there are more kobolds coming. Three of them might be hard for me to handle…”

If I were alone, I could’ve handled it somehow with the Snipe and Lurk skill, but it’d be hard to deal with them while I’m carrying a nearly immobile Megumin around.

“Getting scared of dealing with a few kobolds is really pathetic! I’m giving you 62 points! I regret even giving you such a high score in the first place!”

“If I abandon you, I’ll be able to win easily! Do you want me to prove it here and now!? … Hey, let me go! That was a joke! I won’t abandon you, so stop getting in my way! I can’t very well shoot like this!”

As I shook off Megumin who clung onto my pants with a death grip, the kobolds took that chance to close the distance.

“You idiot, we are really in a pinch now! I could’ve stood a better chance if I was able to thin their numbers with Snipe before they closed in! Ah, there’s even more of them now! There’s no way I can win against five of them!”

“Kazuma, now is not the time to be assigning blame! Now that it’s come to this, you should give me some of your mana! We should be able to get away far more easily if we were both running that than carrying me on your back!”

It’s all because of her that we ended up in such a crisis, but I can’t really lecture her in this situation.

Using Drain touch, I gave her some of my mana, and she immediately leapt to her feet.

“Stop joking around! I’m obviously running away with you! … Ah! You little bastard, you asked me to give you enough mana to run away just so you can leave me behind as bait! Dammit, you don’t believe in me at all!”

Megumin dashed on ahead, and I followed, hot on her heels.

“I would’ve had more trust in your abilities if you didn’t say you’ll be able to win easily if you abandoned me! … Ah, Kazuma, they are in front too! We are surrounded! This is really bad!”

“Dammit, how did Kobolds outsmart us!? Now that it’s come to this, I’ll use my Snipe skill to thin out their numbers so we can break straight through them! Once we are through and gained some distance, I’ll use my Lurk skill to make out the rest of the way!”

I raised my bow and let loose an arrow at the fast approaching kobolds, while Megumin next to me gripped her staff in preparation for close combat–

— After reaching the town of Axel, we got in line behind the returning adventurers waiting to go through the gates.

Megumin and I were completely silent.

Our fierce battle with the kobolds left us completely exhausted…

“Huh? M-Megumin? What a coincidence! You’re together with Kazuma, so you must be coming back from your daily ritual, right?”

Just then, Megumin’s self proclaimed rival, Yunyun, showed up behind us.

Along with her was a party of what appeared to be newbie adventurers.

“Are you friends of Yunyun-san? She saved us when we were being chased by a rookie killer…”

“Yes, I really can’t thank her enough… If Yunyun-san didn’t show up, we would probably have been wiped out!”

“Yunyun-san is really strong! I can’t help but look up to her!”

Rookie killers are cunning and cruel monsters that hang around creatures like goblins and kobolds that, despite not being particularly strong, command a fairly high price per head.

Yunyun, after receiving praise from the adventurers she saved, turned beet red and stiffened up.

“I see, a rookie killer, huh? To us Crimson Demons, such creatures are but experience points. I recall ripping one to pieces when I was younger.”

After hearing such a confident statement, the adventurers shifted their gaze to the other Crimson Demon.

“… Oh? You ripped a rookie killer to shreds before? I’ve spent many years with you, but I didn’t know about that at all.”

“Well, killing a rookie killer isn’t anything to boast about. It’s natural that you wouldn’t have known about it. I wish I could be present, but we were engaged in a fierce battle with monsters over on that mountain…. A rookie killer, huh? Well, if I was present, it would’ve been defeated in a flash.”

Megumin, who had almost been defeated in battle against a band of fierce kobolds, boldly said, and Yunyun’s eyes started glowing red.

“Oh, I see, so that means that there was an even stronger monster than the rookie killer around, right? Isn’t that a really big deal, Megumin? We need to report this to the guild!”

“Oh, I’ve already taken care of it, so there’s no need for that! W-What are you doing!? Trying to take a look at my adventurer’s card without permission is a violation of my privacy!”

As these two archmages started struggling over Megumin’s adventurer’s card and, with it, the monsters killed records, the surrounding adventurers started gathering around them and shouting encouragements.

One of them is an archmage capable of killing a rookie killer single handedly and has the admiration of the beginner adventurers in this town, while the other is a defective archmage who was almost defeated by a pack of kobolds…

“If you aren’t lying, then show me your card! You always tell such cheap lies!”

“I don’t want to hear that from you! You’re the one who keeps putting obvious lies about the many friends you’ve made in Axel in your letters back home! Oh, what’s with those eyes? You want to go? Very well, we’ll put an end to this on this very day!”

These are the two Archmages fighting for the right to be called the best mage in this town, but—