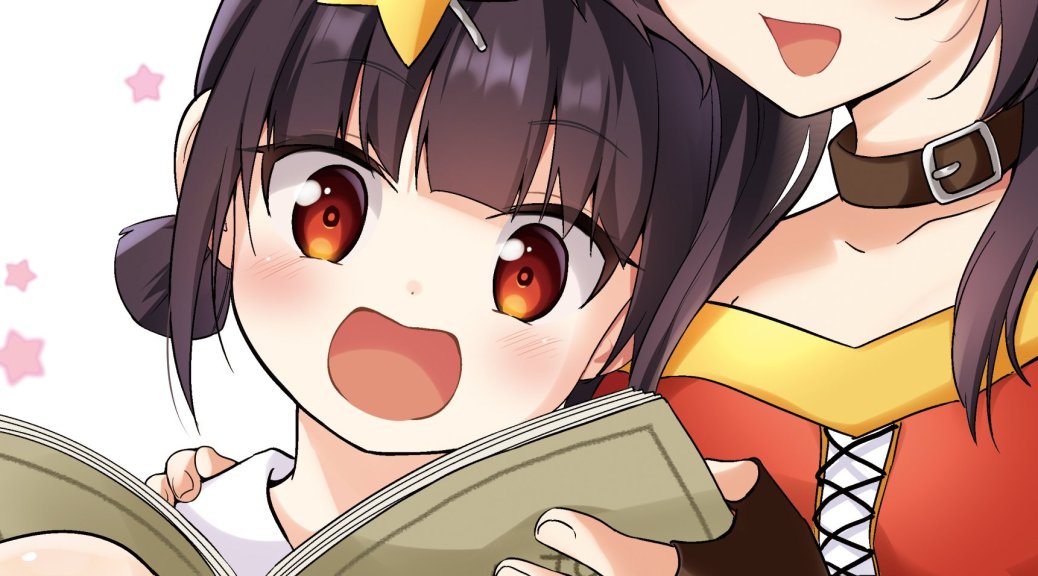 The Strongest Devil Summoner of the Crimson Demons

After coming to the Crimson Demon Village, I’ve had nothing but time on my hands.

There really isn’t much to do in a small village out in the countryside.

Aqua and Darkness ran off somewhere, and Megumin left Komekko in my care before busying herself with housework.

And thus, Komekko and I ended up playing in the backyard.

“I got it. Nee-chan told me to play with nii-chan too.”

That girl… she better remember this.

… Oh, I thought of something. This will be extremely effective on a siscon like her.

I took out the snacks that I brought along as a gift.

“Hey, Komekko, between me and Megumin, who do you like the most? I’ll give you this snack if you-”

Seeing Komekko snatch away the snack without a second thought, I briefly wondered if this is really okay.

“A-Ah, nevermind. Repeat what you just told me to Megumin when she comes back later, and I’ll give you another snack.”

While hiding a snicker, I squatted down to Komekko’s height.

… Is this why they’re called Crimson Demons?

“Yeah, let’s leave that till you’re older, okay? Komekko is a Crimson Demon, so it’d be a real headache if you actually end up calling a real devil.”

“Okay. I got scolded by a small goblin when I summoned him without an offering.”

I yelled out in the direction of the house.

“ーーSeriously, what’s the matter? I told you to keep Komekko company while I was handling housework, didn’t I?”

Megumin ran over while wiping her hands on her apron.

“Now’s not the time to be doing that. Your sister did something really amazing. Hey, Komekko, tell Megumin what you just told me.”

“What are you saying!? Komekko, I’ll apologize if I did anything bad! It really hurts, so please cut it out!”

No, not that line.

“I said it, so give me another snack.”

“Kazuma, I’d like to have a word with you, so please come with me.”

“That’s not it! I mean, I did tell her to say that to you in return for a snack, but that’s not why I called you here. Your sister has summoned a devil!”

I hastily explained while handing the snack over to Komekko.

“That’s something that every Crimson Demon does at some point. I used to perform the ritual to summon the God of Destruction when I was a kid.”

“Don’t say that with such a nostalgic expression! … Wait, what!? So, you’re saying it’s fine!? But Komekko was saying something about a small goblin…”

“Summoning devils requires an extremely difficult and delicate ritual. On top of that, even if one has the talent to be a devil summoner, it would take at least a decade of hard work to summon even an imp, the weakest type of devil.”

But if that’s the case, what Komekko was talking about…?

“Plus, even if the ritual does succeed, a goblin isn’t a devil, so there’s no way it’d be summoned. Komekko, you shouldn’t tease him too much, okay?”

“Right then, I’ll get back to the housework. Please play with each other, alright?”

After patting Komekko on the head, Megumin went back into the house.

… So she was just teasing me…

I thought that I just ran into yet another troublesome incident, but I guess it was just my imagination.

Seriously, these two sisters keep throwing me for a loop.

“See, your sister got angry because you said such things. It’s a little hypocritical coming from me, but lying is bad, okay?”

Her stubbornness is just like that of her sister’s.

“But Megumin just said it, didn’t she? You can’t summon a goblin with a summoning ritual.”

“But it came out. I gave it the shell of a cicada as an offering, but it just scolded me. ‘Don’t call upon me without a proper offering. I’ll let you off this time, so don’t do it again.’ it said.”

That bad feeling came back.

“Say, can you describe that goblin to me?”

Just in case, I confirmed with Komekko…

“It was really small and black, and had claws, wings, and a tail.”