On a certain Midsummer’s night 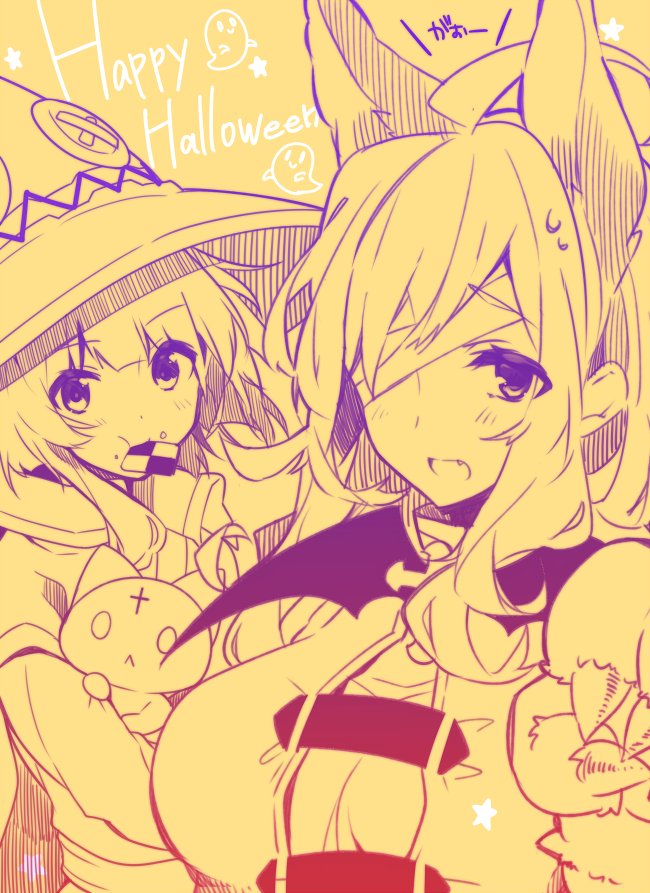 On an extremely hot and stuffy night.

“Just then, just when I thought I finally got away, I felt something land on top of my head. I looked up…”

The adventurers who couldn’t possibly sleep in this heat were huddled together at the back of the tavern in the guild.

“And saw a large swarm of cellar spiders crawling on the ceiling above me!”

We specifically asked the guild workers to darken the interior of the tavern, and started trading horror stories in that dim and gloomy place.

If it was me alone, even on a hot and stuffy night like this, I would be able to make it through using Freeze.

But most of these adventurers have no such recourse and have been troubled by the heat the past several nights.

Partly out of compassion for them, and partly to pass the time, I called this bunch to gather here and cool off with some horror stories.

“U-Umm, this is quite scary and all, but it feels somewhat different from what I had in mind…”

The adventurer was sharing their experiences in a dungeon, but, well, how should I put it, it’s more physically disgusting than scary.

“What are you saying, Kazuma? Those are cellar spiders, you know? The little ones that scuttle everywhere and will drop onto your body if you let your guard down for even a moment! There’re very few other things that are scarier…”

“Please stop, Aqua-chan! It’s reminding me of the last time I went into a dungeon…”

“Then let me tell you a special horror story of mine. This happened on my tenth birthday…”

Megumin’s red eyes were clearly visible in the dimness of the tavern.

The adventurers gulped in response.

“My family is very poor, so we often have troubles getting food. So, on the day of my tenth birthday, well, I didn’t really expect too much for my celebration, but… my sister gave me a birthday present.”

Isn’t that a good thing?

It doesn’t seem like I’m the only one who thinks so, and the tense atmosphere surrounding us abated somewhat.

Megumin gazed at us and continued.

“So, the present… She must have spent quite a bit of effort to gather them up for me. Her face was caked with mud when she happily walked up to me and said ‘Onee-chan, I caught a lot of big and black ones!’ before giving me a wriggling bag-”

The adventurers once again broke out into screams.

No, this isn’t right at all.

“Stop that, this isn’t the kind of story I wanted to hear! These aren’t horror stories at all!”

After hearing my words, Darkness started blushing for some inexplicable reason.

After I said that to Darkness, another adventurer said,

“Then, how about you share a story, Kazuma? You must have some great ones, right?”

Sure thing. I loudly cleared my throat and started sharing a famous Japanese horror story-

“– I see, anyone who sees a picture of that woman will die within a week. So it’s like Premonition of Death? But with Aqua-chan around, wouldn’t that problem be easily resolved? Compared to that woman, that terrifyingly skilled Dullahan is far scarier.”

“Also, about that Sadako ghost, how would you communicate with her if you don’t have that ‘telephone’ magic item that Kazuma mentioned? Doesn’t she only appear if someone is already using that item? Suddenly appearing from behind like that, is she using the Lurk skill to sneak up on them? Wouldn’t that just make her a burglar who only targets folks who are rich enough to afford that item?”

… Dammit, this is why I hate this world.

It’s just a horror story, why are you guys nitpicking it so much?

Is there really no way to make these guys feel true horror?

Aqua seemed to have been able to read the mood for once, and gave me a thumbs up as if to say ‘leave it to me.’

“Then let me tell a story next. This will definitely be very scary for men.”

All the adventurers seemed to relax upon hearing Aqua’s declaration. They’re probably thinking  ‘Ah, it’s just one of Aqua’s stories, how scary could it be?’ or something along those lines.

“In a city somewhere, there’s a man who lives by himself. That man is troubled by door-to-door salesmen continuously pestering him, and eventually thought of a great idea to deter them.”

The idea that the man thought of was to place a sign in front of his door.

After doing that, the various door-to-door salesmen stopped pestering him, and he was able to live a peaceful life.

“However, one day, the man heard a knock on his door, and wondered if he was hearing things. That’s because this is what is written on the sign he placed.”

Growing curious in response to Aqua’s words, we unconsciously let out a gulp.

“Written on the sign is ‘The resident of this house is a hardcore homosexual. If you are prepared for what comes after, feel free to knock on the door.” The man peeked out beyond the door, and standing there was… an obviously excited man, an aroused smile on his face as he placed a hand on the door-”

The male adventurers interrupted Aqua with a scream.

— Stop! This is scary, sure, but these aren’t horror stories!

19 thoughts on “Short story: On a certain Midsummer’s night”