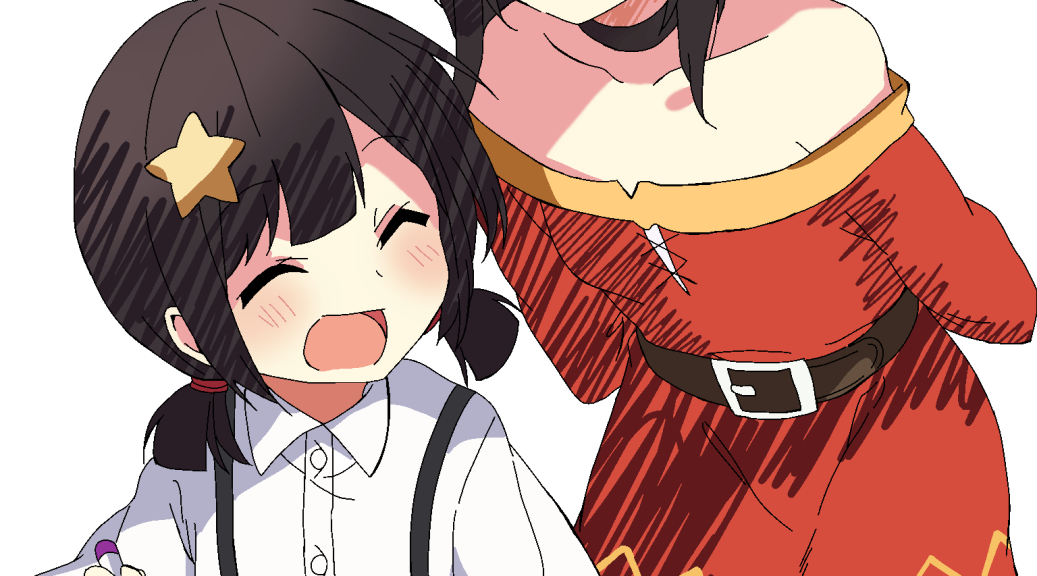 Just what is happening?

“Onii-chan, I want to eat frost lizard steak next!”

“Leave it to me! Onii-chan is really strong! It doesn’t matter if you want a frost lizard or a salamander, it’ll be a cinch to me!”

On the way back from school, I came across Bukkoroli trying to bribe Komekko with food. This is probably something I should be reporting to the adults of the village…

Though, this NEET is a rare lifeline to Komekko who’s still growing up, so I could turn a blind eye to this…

“I’m going to become Onii-chan’s wife when I grow up!”

“You damned NEET, how dare you seduce my sister!”

“Wai-st-stop, Megumin! Why are you hitting me all of a sudden?!”

— After hearing his explanation, it seems like Bukkoroli found Komekko wandering around the village and is keeping an eye on her.

Komekko would probably have ended up going into the nearby forest in search of food if left alone.

“Listen up, Komekko, the forests around the village are full of strong monsters, so you must never go out of the village by yourself.”

“Even if I’m with the powerful Bukkoroli?”

“Definitely not. This NEET might be strong in combat, but if you go alone with him, it’d be dangerous in a different manner.”

“What are you trying to say? I don’t have that kind of tastes!”

Komekko looked at the two of us as we argued incessantly.

“Who is stronger, Onee-san or Bukkoroli?”

After a short silence, the two of us both pointed to ourselves.

“Obviously it’s me, the number one genius in the village…”

“Obviously it’s me, who spends a lot of time hunting monsters every day…”

The two of us started squaring off in front of Komekko again.

“… You didn’t forget how you cried after I pushed you into the pond when we were little, did you?”

“… How long ago was that? I can do this now, you know!? Light of Reflection!”

“Y-you bastard, how could you use magic during a quarrel with a girl who’s younger than you!?”

I angrily shouted after Bukkoroli who concealed himself with magic, and I heard his gloating voice ring out from somewhere in response.

“Admit your defeat, Megumin! Don’t think I’m the same guy as when I was younger! Even if I face the Demon King’s Army…”

The one who interrupted Bukkoroli mid sentence is the owner of the number one shoe shop in the village. In other words, Bukkoroli’s father.

“I asked him to mind the store, and he ended up disappearing off somewhere. Have you two seen that wastrel around?”

Komekko and I pointed at an empty spot in the air.

“He should be around there.”

As we said that, we heard frantic noises of someone quickly running away.

And Bukkoroli’s father cast a spell in that direction–