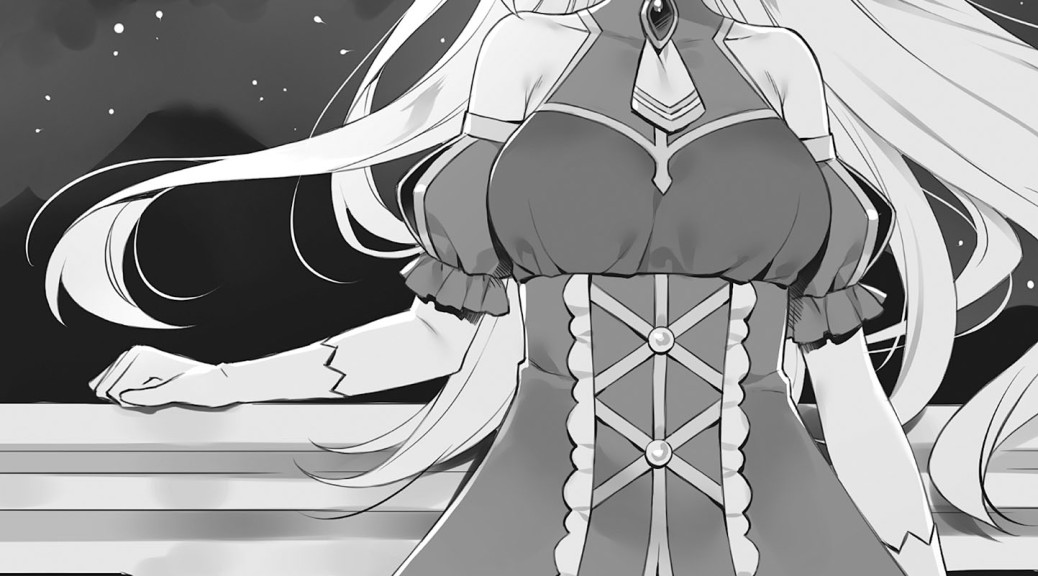 A woman stares out into the starry sky on the balcony of the castle.

The woman wore an exquisite dress that is sure to make any girl green with envy.

Her glossy, shoulder length blonde hair sways lightly in the night breeze, and she closed her eyes contentedly.

The woman noiselessly walked over to the railings and leaned over them, reaching out to the stars above.

“Princess, I hope you’re not planning on sneaking out at night.”

The man who emerged from the corner of the balcony was an older man wearing a full formal suit complete with a tailcoat.

His white hair is carefully slicked back, and his mustache is the same color as his hair and equally well cared for.

His posture is like that of a picture, standing stock straight without wobbling an inch.

“Gramps, don’t you think it’s a little rude to be sneaking into the bedroom of a woman like this?”

“My apologies. I’ll accept any lecture you intend to give me, but for now… Can you please let go of that rope?”

She let go of the rope that has been painted black to blend into the night, which made a loud smack as it hit the ground.

“Oh my, for you to admit defeat so easily, has something happened? Usually, you would’ve let loose with darts tipped with paralytic poison and offensive magic.”

“Come now, there’s no reason for me to resort to such barbaric acts. Ohohoho.”

She surreptitiously kicked the poison tipped dart by her feet off the balcony.

The battle between the princess who wishes to sneak out of the castle and the butlers and maids that seek to stop her is well known around these parts, and today isn’t anything special.

“Well, let’s leave it there for today. Still, did something happen? You seem much happier than usual.”

“Oh, you noticed? I was just having fun picturing that girl meeting up with him.”

“That girl you’re talking about… So that commotion was your work, as I suspected. Even though I’m sure you are aware just how important she is to our country…”

The butler placed a hand on his forehead and shook his head. Even though he had an inkling of it, it seems that learning the truth was still a shock to him.

“Gramps, there’s no need to worry about me trying to sneak out anymore. We are heading to the Kingdom of Belzerg the day after tomorrow, right? I’m looking forward to this trip, so I’ll promise not to do anything stupid until then.”

“If you’d promise to do that forever instead of just two days, it’d make this geezer’s life a lot easier.”

“Well, you’ll have to provide me with a better deal.”

After hearing such carefree words, the butler took a deep sigh, before swiftly vanishing from the balcony.

The princess whispered into the night breeze. 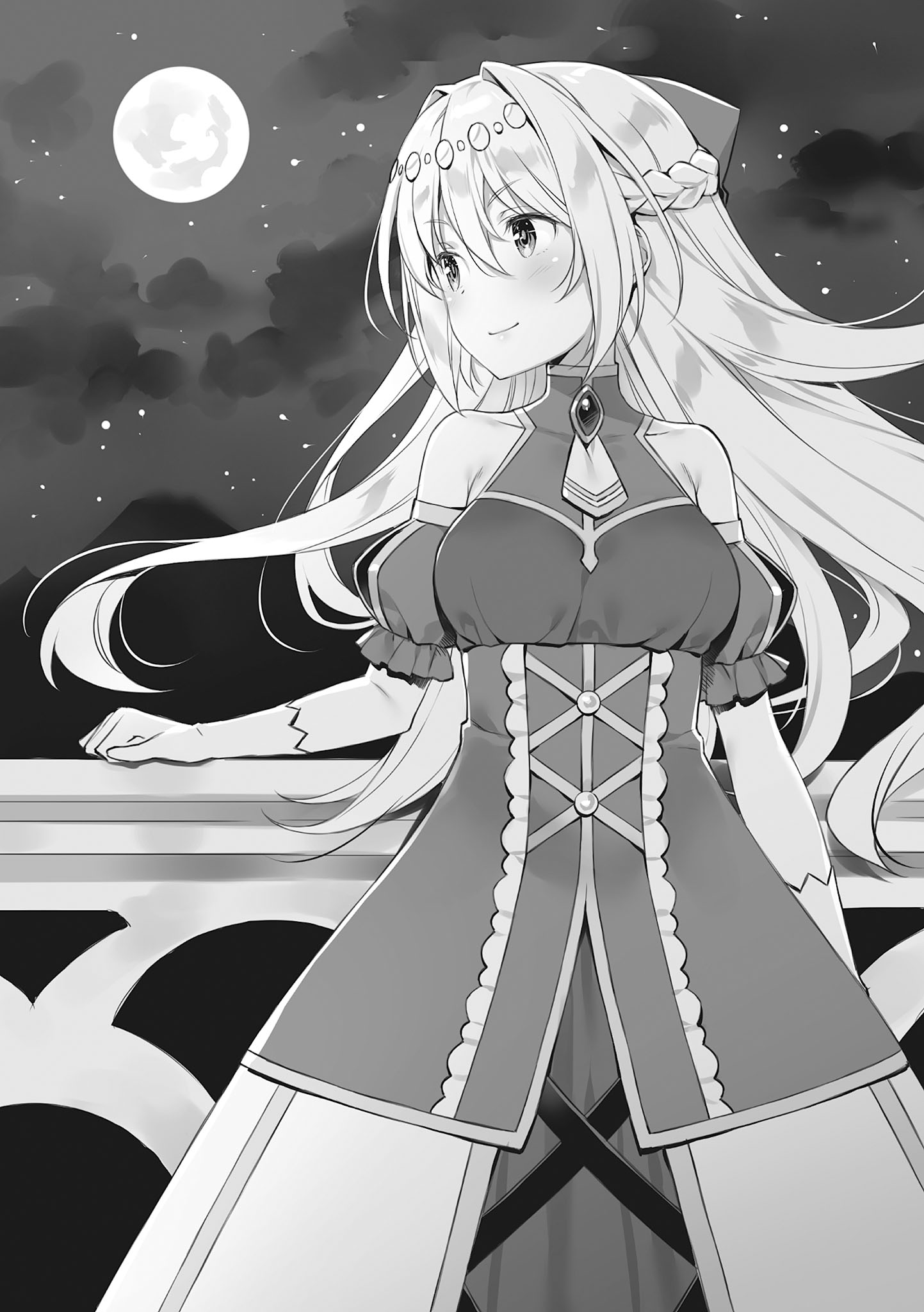 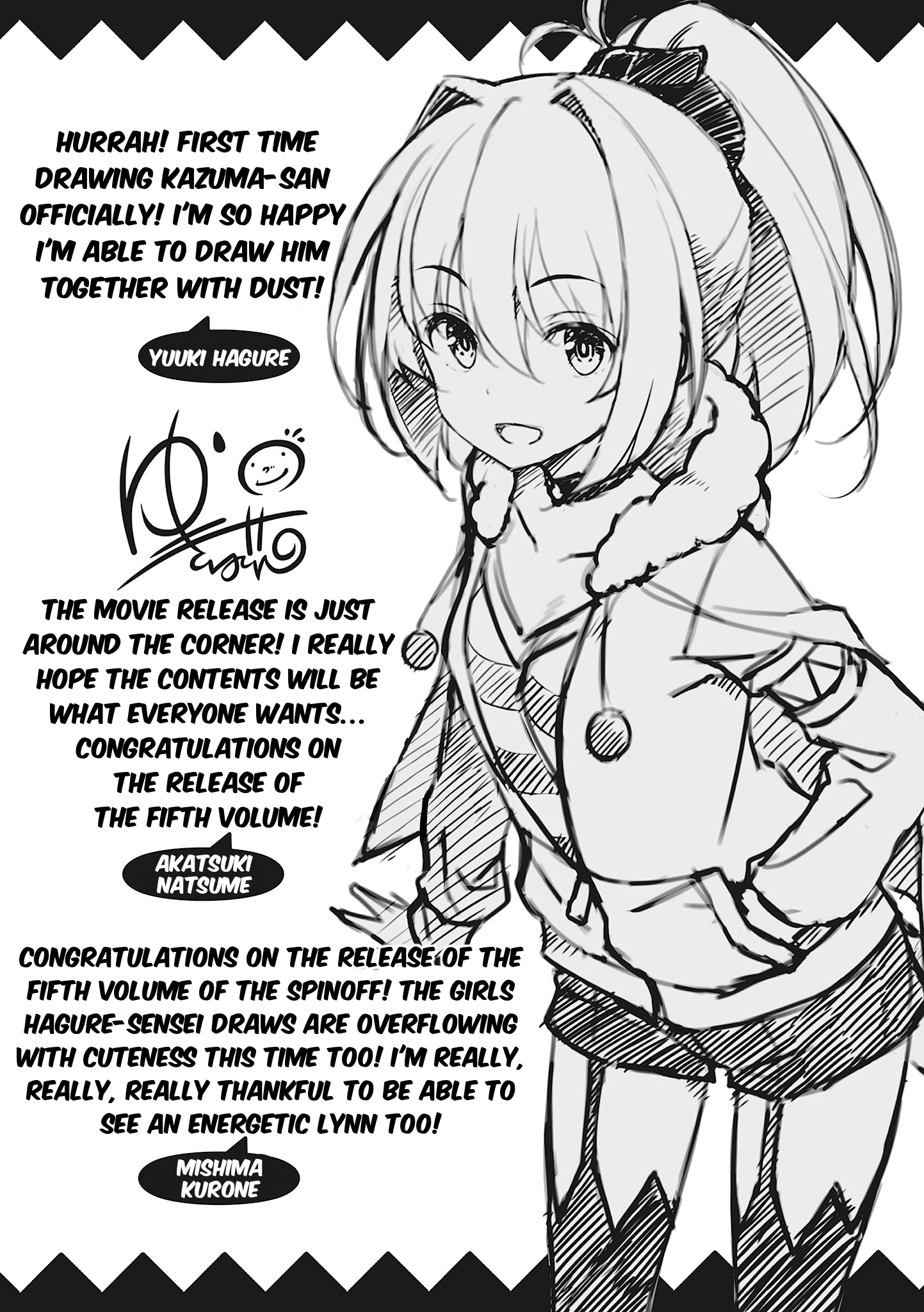 Oh my, it’s the fifth volume, everyone! When this spinoff was first entrusted to me, I was terribly worried that this endeavour might be abandoned after the first volume, but it’s managed to make it to a grand total of five volumes.

That secret of Dust will be made clear in this volume. I’m sure many of my readers will be completely taken by surprise by what Dust truly was in his past.

… Sorry, I went too far. With all the various hints and information we’ve left in the previous volumes and the main work, I’m sure most of you already have some idea about that. Still, this is the first time I’ve put the old Dust to paper, so it might feel a little disgus… I mean, a little different than what you are used to, but that what Dust really was like in the past. Really.

I’m writing a spinoff work, so I’ve done my best to limit the introduction of original characters, using side characters that appeared in the main work or other spinoffs.

This would be the first time an original character of mine has taken a main role… Oh, yeah, she’ll be the first. (Though I’ve introduced the general shop owner and the loli defence force as side characters.)

As you know, Konosuba as a series is chock full of unique and colourful characters. I tried to give her a colourful personality of her own so that she could stand together with them. What did you think of her?

Come to think of it, most of the women around tend to be fairly lacking when it comes to the chest department. I didn’t set out with that goal in mind, so how did it end up like this?

Now, then, allow me to touch on the volume itself. As usual, this volume concerns what Dust and company are doing in the background while the events of the story are taking place. However, of note is that this volume takes place concurrently with volume 15.

The significance of this will become clear in the next volume, I believe, so look forward to it.

Now then, as usual, I should give thanks to everyone who have helped me along the way.

Akatsuki Natsume-sensei, thank you for approving the new character. Though, he almost never refuses anything… No, it’s pretty much never, to the point where I’m actually more worried that his editor might step in and beg him to refuse something.

Mishima Kurone-sensei, your illustration of Serena was truly amazing. There are a lot of scenes in vol 15 where she was subjected to Kazuma’s tender ministrations. Thank you very much.

Yuuki Hagure-sensei, thank you for providing the wonderful illustrations for this volume too. Especially for rendering the original character in such a cute way! I can die a happy man now. Seeing your characters that you’ve written be brought to life in such a way really sends all your stress about writing flying away.

Everyone in the editorial department of Sneaker Bunko, Mr. M who was in charge, and everyone involved in getting this book to the shelves, thank you very much. I believe the best form of thanks is to have all that effort result in an enjoyable work, so I did my best to create that this time too!

And to everyone who picked up this volume, thank you.

I hope to have your support in the future too.

And Dust 5 ends on a sequel hook. I must say, this has been a far more meatier fare than what I’ve come to expect from the Dust spinoffs, and actually makes me a little excited for Dust 6. Which should have already released by the time you guys are reading this, so with any luck I would’ve already begun working on it.

However, as some of you might already be aware, Natsume released a brand new short story collection on the first of January, so I will be working on that one first. Of course, there will be the Dust short stories going up next week as usual, so look forward to that.

This time, the cleaning for the images has been done by Sero, and the typesetting, including those fancy banners at the top of each new chapter, have been done by Ulti, which I would like to extend thanks to for their support.

Now, then, see you guys next month for Konosuba: Yorimichi.