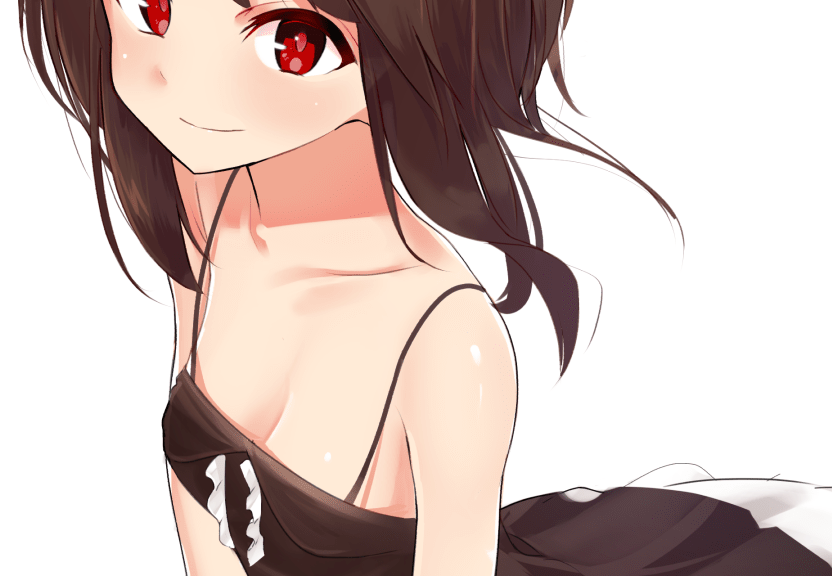 Vol 9 Toranora short story: The power of the Crimson Demons

Having found it bothersome to cook a meal, I went out to grab some lunch and am now currently wandering around the city of Axel after my meal.

— Just then, I came across someone I knew hiding behind a wall and peeking beyond it.

“Oh? Hey, isn’t that Yunyun? What are you doing out here?”

That person is Yunyun.

“What are you peeking at? Is there a pair of cats or neroids mating or something?”

“Of course not! Why would I want to look at such a thing? Just look! See for yourself!”

Following her instructions, I peeked out past the wall and saw Megumin in a black dress.

“Oh, I see, you’re just stalking Megumin like you usually do.”

“I don’t stalk Megumin! Just what kind of person do you think I am?”

Yunyun’s eyes started glowing, and in response, I placed a finger on my lips and made shushing motions.

“You’re too loud. She’ll notice. Still, what’s up with her? There aren’t any festivals or events going on, so why is she wearing something like that? I don’t know where she’s heading, but this seems interesting, so maybe I’ll join you for a bit.”

“I know, I’m curious about that too, that’s why I started following her… For some reason, hearing Kazuma-san say that make me feel really uncomfortable.”

Ignoring Yunyun who was mumbling some incomprehensible things, I crept after Megumin as she walked down the back alley.

Not long after, Megumin seems to have discovered something and came to a stop.

“Oh, seems like a couple of neriods are mating over there.”

“Is watching neroids mate really so interesting? Why is Megumin looking so engrossed in it?”

“No, anyone’s interest would be caught by seeing neroids mate. Actually, what exactly are neroids anyway?”

“I want to know that too. How does everyone just casually make them into drinks? Just what are they?”

“Even Megumin was moved to tears…”

With her eyes red both from her heightened emotions and her tears, Yunyun said that as we continued following Megumin.

After leaving the back alley, Megumin headed to the theatre.

She seriously looked through the posters out front.

“Does she have a show she wants to watch?”

“Hey, you’re too loud, and your eyes are glowing! I understand getting passionate about a show you like, but please restrain yourself, we’ll get discovered!”

“Then the elder of the village said ‘If there isn’t any bread, then let us feast on the monsters.’ This is said to be the start of the tradition of eating monster meat, which had been declared taboo in the past. After overcoming this crisis, every town came up with their own local monster speciality…”

“Hey, Megumin’s leaving. Abarenbo Gunsho is quite interesting, so maybe I’ll come back later, but for now, let’s go after her.”

Probably getting her fill of the show, Megumin left the theatre, and we followed after her.

“Kazuma-san, are you interested in Abarenbo Gunsho too? What a coincidence, I-I’m interested in that work too. But can you enter the theatre by yourself? I’m already used to it, but going to the theatre alone is actually pretty difficult. Do you have someone to accompany you? I, err, it might not be my place to say this, but, err, if you don’t mind…”

“Okay, fine, we’ll go together. If you aren’t comfortable with that, I can get Megumin to come with us too, so just stop saying such pitiful things!”

Just then, Megumin, for some strange reason, went into a police station.

Did she dress herself up just to turn herself in!?

Seeing that, both Yunyun and I barged into the station and said to the officer who was talking to Megumin:

“Sorry, I’m her guardian! We are really sorry for what happened!”

“Megumin you idiot, what did you do now!?”

“Seriously, what is wrong with you two? Don’t just automatically assume I committed some kind of crime just because I went into a police station!”

Maybe if you didn’t act like that every day, we wouldn’t automatically jump to that conclusion.

“I’m sorry, Megumin. But there’s no way I could’ve expected that you were a poster model for the police…”

“Hey, just what do you mean by that? Why don’t you make it clear?”

That’s right, Megumin is dressed this way because she accepted a request to become a model.

“Still, to think that Megumin would become the face of the police. People really have some strange tastes…”

“Hey, what do you mean by strange tastes? Why don’t you make it clear?”

Having heard our conversation, the policeman said,

“Ah, she isn’t posing for a police promotional poster, it’s for an anti sexual harassment poster.”

We turned around and saw what appeared to be a draft of the poster.

Right in the centre of the poster is the face of a scary seeming girl with glowing red eyes, and below her are the words,

In bright bold letters. The rest of the poster appears to be warning about the terrifying consequences of committing sexual harassment in this town-

14 thoughts on “Vol 9 Toranora short story: The power of the Crimson Demons”