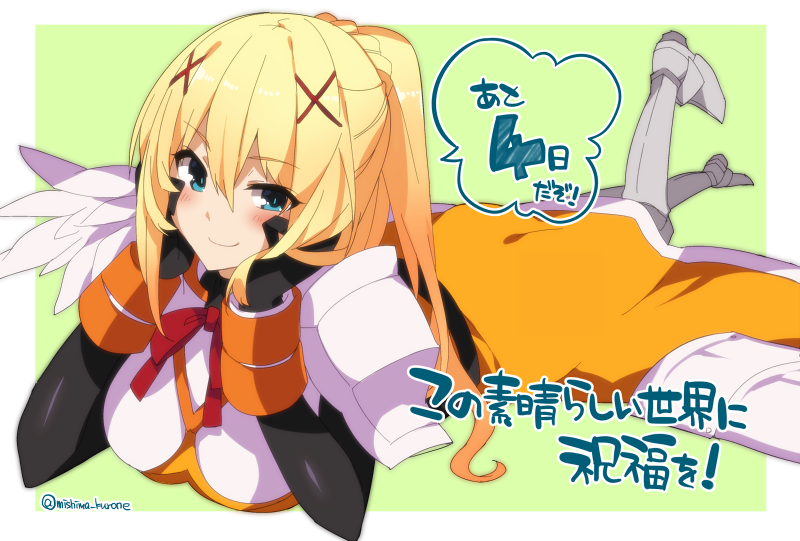 When I was in the adventurer’s guild, checking if there are any easy yet profitable quests like I usually do, I received a strange, “off the record” request from Kazuma. It seems like the guild regard him as the caretaker of his party, of sorts, so they’ve been making him clean up after their messes.

And so, Kazuma wanted me to investigate exactly what his comrades get up to when he’s not around.

It’s a request from a close friend whom I owe a lot to, and what’s more, he even promised me an adequate reward, so I had no reason to refuse.

In that case… Let’s investigate the Crusader Darkness.

I did follow her in the past, but I was with someone else back then. Following her alone will make it easier for me to act.

When I was observing Kazuma’s mansion in the morning, I saw Darkness angrily throw open the door and stomp out.

“This is a waste of my time! I don’t want to spend any more of it on a lazy bum like Kazuma… Wait, this is…”

“Don’t bother. You shouldn’t concern yourself with that thing, Darkness.”

With that, Megumin and Darkness angrily left the house.

Looks like Kazuma refused to accompany them on a quest.

Now that he has a large mansion and a huge pile of money, who would want to continue working such a dangerous job as an adventurer? I understand Kazuma’s feelings extremely well.

Darkness bid farewell to Megumin on the way, and headed towards the adventurer’s guild..

I followed behind her and entered the guild.

“Giant Frog subjugation huh… Getting swallowed whole and covered in slime from head to toe… Isn’t this just the perfect opponent? Why do Aqua and Megumin hate them so much? This is so unfair. I’m the only one who has yet to experience it…”

Darkness mumbled something to herself as she stared at the Giant Frog Subjugation quest.

After standing there for a while, it seems like she eventually acknowledged that she can’t handle them by herself, and moved over to the counter to chat with Luna.

“Excuse me, I’m alone for today. Are there any adventurers who’d be able to team up with me?”

“Ah, teaming up with Darkness-san… Err, well, everyone seems to be pretty busy…”

She looked around at the seemingly free adventurers lazing around the guild, and every one of them hurriedly turned around.

“Come to think of it, today’s my little brother’s birthday. I should hurry home.”

“Oh dear, I seem to have drunk a few too many glasses. If only I weren’t so drunk.”

I understand how these people feel. Once you’ve partied up with Darkness once, you won’t ever want to go through that ever again.

Incapable of hitting any of her attacks, charging directly towards an enemy on sight, and, above all, a genuine pervert who’d charge into the path of even her allies’ spells.

Only when Kazuma is in the party can those tendencies be somewhat controlled.

“Everyone seems pretty busy. Forget it then.”

Hearing Darkness’s words, everyone present let out a sigh of relief.

She might be top class as far as vanguards go, but if that vanguard were to charge directly into the midst of enemies without saying a word, it’d be better not to party with her.

Afterwards, Darkness still wanted to accept the Giant Frog subjugation quest by herself, but Luna eventually talked her out of it. After reluctantly letting go of the matter, Darkness left the guild.

“She’s standing there by herself. Just what is she doing?”

After coming to the village square, Darkness, for some unknown reason, simply stood there and gazed at the fountain.

That kind of reminds me of someone.

Ah, don’t tell me, does this girl have no friends too?

Yunyun who had become like my old friend lately pretty much spends all of her time on her own. Whenever she has nothing to do, she would dumbly gaze upon the passersby. Just like that.

Apart from Kazuma’s party and Chris, Darkness doesn’t seem to interact much with anyone else.

Kazuma’s a pretty swell guy, so everyone gets along well with him.

That self-proclaimed goddess is pretty popular too thanks to her party skills.

Though no one is willing to party up with that explosion brat, she somehow seems to have quite a few people hanging around with her. She even followed me with a bunch of strange girls a while back.

And Darkness… Well, she has her own duties apart from being an adventurer, so she should be pretty busy. I suppose it’s fine.

At the very least, she isn’t as bad as Yunyun.

Afterwards, Darkness started wandering around the city. For some strange reason, she seems to be purposely walking down some shady backstreets.

Her eyes seem to be sparkling as she walked down the deserted streets, and she’s excitedly panting with a flushed face… Nah, it’s probably just my imagination.

After pacing several times around the street in front of the strange shop, she headed back home with a dejected expression.

Even though she didn’t run into any incidents, today was still a tiring day.

And this is the last of the Dust short stories. Regular programming will resume on April 6th.