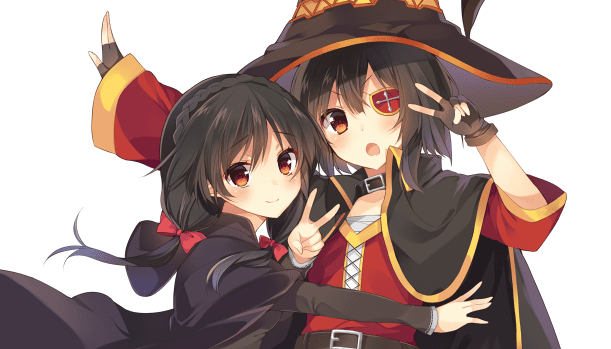 This happened back when I was exploring Axel with Yunyun.

“W-Wait, are you serious? Crimson Demons, you mean that clan of super powerful mages that even the Demon King’s Army is afraid of, right?”

We could hear such whispers coming from behind us as we walked past a certain street.

I maintained a calm appearance, and glanced at Yunyun beside me.

She seemed to be acting as usual, but I could see the edges of her mouth constantly twitching upwards.

Behind us, the two men continued their whispered conversation.

“Speaking of Crimson Demons, every single one of them is an extremely skilled mage, and have mana far beyond those of regular mages.”

“Hey, did you know? It seems like the Crimson Demons have built a watchtower next to their village from which they can keep watch on the Demon King’s castle. That’s why the Demon King’s army need to keep a significant force in the castle at all times. If they commit those forces to an attack and leave the castle lightly guarded, the Crimson Demons will immediately know and launch an attack. It’s all thanks to them that things are so peaceful around here.”

My smile is probably showing by now. I can tell from looking at Yunyun’s expression.

We pretended to be very interested in the town of Axel, curiously looking around and purposefully slowing down our pace.

It’s definitely not because we wanted to hear what the two guys behind us were saying.

… Yes, we are just extremely interested in the goods on display at a nearby store.

The storekeeper who was sitting cross-legged on the ground looked up at us and said,

“Welcome, but if you are just here to window shop, I must ask that you leave quickly. These are all items that most adventurers can’t make use of, after all… Wait, you two are Crimson Demons!”

He exclaimed in surprise upon seeing our eyes.

“How could I not recognise that the two of you are Crimson Demons, that clan that’s an important exporter of magic items… Please, browse my wares! These are all items that regular adventurers can’t utilise, but the two of you can definitely make use of them! Please, go ahead and browse to your heart’s content! In particular, this is the jewel of my store!”

The owner picked up many items for us to peruse.

“Ah, no, we were just a little curious, we don’t really intend to buy anything…”

Yunyun and I hurriedly moved to decline, but…

“As expected of Crimson Demons. Even that brusque shopkeeper is enamoured with them.”

“Yeah, that old man wouldn’t sell his items to someone he doesn’t judge worthy no matter how much money they offer, but he has even taken out his prized item for those two..”

The two guys behind us sounded quite impressed.

Seems like the owner of this store is quite famous.

Hearing their words, Yunyun desperately tried to suppress her smile as she picked up an item off the shelf.

Saying that, she handed over the item to me.

“Hmm, yeah, this is pretty well-made. I can’t feel any magic from it, but the craftsmanship is quite marvelous…”

To be honest, I have no idea what exactly is the item Yunyun handed over to me, nor could I detect any kind of magic from it, but it must be a good product.

Seeing Yunyun pick that item up, the owner exclaimed in shock.

“I-I didn’t expect you to take a liking to that…! You two have a good eye… That’s only meant to be used to attract customers. It’s not for sale, but… I like the looks of you, so, very well, I’ll sell it.”

Hearing the owner’s words, the two men behind us raised a shocked voice.

“Yeah Megumin, I didn’t expect to find something like this in the town of beginners.”

We said that in a voice loud enough to be heard by everyone present, before buying the item and leaving the scene under the envious gaze of the onlookers.

After rounding the corner, both of us squatted down at the same time.

“How would I know? I should be asking that of you! This is a piggy bank no matter how you look at it, but it must have some kind of hidden power…”

“Ahh, thanks for your hard work, you two. Here’s your cut.”

“Sorry for always taking your money like this, Old man.”

“Still, you’re pretty skilled. I didn’t expect Crimson Demons to fall for your tricks so easily.”

We heard such a conversation coming from around the corner.

That’s the voice of the storekeeper from before.

“But, did you know? Crimson Demons are really easy to trick. They are especially vulnerable to phrases like ‘Jewel of my store’ or ‘legendary something or the other’.”

Hearing the three of them erupt into laughter, Yunyun and I emerged from the corner.

“But, did you know? Crimson Demons are very short tempered.”

“But, did you know? Crimson Demons will always rise to meet the expectations of anyone looking for a fight.”

The three men bolted like rabbits, and Yunyun and I furiously chased after them.